The visit of the governor of Wielkopolska – mr. Zbigniew Hoffman – in WZM

On 29.11.2016 mr. Zbigniew Hoffmann – the governor of the province of Wielkopolska visited the head office of WZM in order to meet with ms. Elżbieta Wawrzynkieiwcz, president of WZM S.A.

The aim was to familiarize him with the activities of the company and the development plans.

The president of WZM presented a rich history of the company at the meeting – from its establishment in 1945 to the development projects which are prepared to be implemented in the coming years. 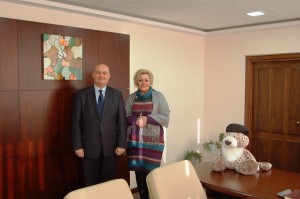